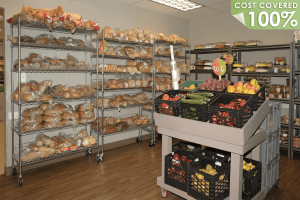 April 5, 2018 – Leesburg, VA: Loudoun Hunger Relief (LHR) unveiled its newly renovated lobby and “client choice” food selection room at an April 4 celebration attended by LHR supporters, community leaders and local officials. The upgrades include a separate lobby for customers and a wide hallway that can better house food items for choice selection, giving families more autonomy over their selections, more privacy while they shop, and – as a result – more dignity while receiving food from Loudoun Hunger Relief’s distribution site.

“At Loudoun Hunger Relief, compassion and dignity have long been core values of our service to our neighbors in need,” said Executive Director, Jennifer Montgomery. “Now, we have a space that better reflects the underlying purpose of the work we do here. We want to make sure that no one in Loudoun is hungry, and we also want to make sure that all feel the welcome, compassion and respect that every human being deserves.” Explained Montgomery: “We love putting items out for choice—everything from bread to sweets, vegetables to deli items—but the way we were set up, it meant that people waiting in line could see those in front of them shopping and perhaps taking some of the things they really hoped for. It caused much anxiety and unhappiness, and it ultimately stole dignity from people who are working so hard to provide for their families. This renovated space now separates the lobby and waiting area from the food selection/client choice area – solving these issues, preserving dignity and giving our clients a space that serves them so much better. We are grateful to HomeAid Northern Virginia for the opportunity to make these improvements to better serve our communities.”

The renovated space was designed, constructed, outfitted and finished completely through efforts of HomeAid Northern Virginia, which builds and renovates homeless shelters and supportive housing facilities via the donated expertise, labor and resources of local homebuilders – enabling nonprofit organizations such as Loudoun Hunger Relief to invest more of their budgets in supportive programs and services rather than building expenses. Knutson Companies led the project as builder captain. Four of its trade partners and subcontractors – Eastern Applicators, ISI Flooring, NEKA Granite Marble Quartz, and Southern Electric Services Company – donated materials and labor to complete the project.

The remodel transformed a “dreary” and non-functional space into a cheerful, welcoming place with a private check-in desk and upgraded the food pick-up area into a more grocery store-like atmosphere. The remodel also added a room for shelving bakery goods and produce, allowing clients to select what they know their families will eat.[divider line_type=”No Line” custom_height=”10″]

See more photos of the renovation and Open House here!

Loudoun Hunger Relief (formerly Loudoun Interfaith Relief) is the largest food pantry in Loudoun County and has served the community for 27 years. Last year LHR provided 1.2 million pounds of food to more than 8,000 individuals. 40% of those served are children. LHR distributes food to families six days a week, year round. Loudoun Hunger Relief was voted Loudoun Chamber of Commerce 2014 Nonprofit of The Year, Leesburg Today 2015 Reader’s Choice Nonprofit of The Year, the Loudoun Times Mirror 2015 and 2017 Nonprofit of the Year, Loudoun Now 2016 Favorite Non-Profit. For more information on LHR, please visit www.loudounhunger.org.

HomeAid Northern Virginia, a chapter of HomeAid America, engages the resources and interests of the homebuilding community and its corporate partners in order to undertake new construction and major renovations to properties owned by homelessness service providers that help homeless individuals and families gain stability and get back on the road to self-sufficiency. The organization was started in 2001 by members of the Northern Virginia Building Industry Association (NVBIA), and since then, has completed more than 119 projects valued at more than $14.7 million, serving more than 98,500 homeless individuals.